It’s a busy time of year with summer coming to an end, school starting, preparing for fall and all the delicious food that comes with it (more on that later) but we were able to squeeze in one more weekend at the cabin!  We opted for a fairly simple menu because the weather was perfect and we wanted to make the most of the holiday weekend by spending as much time outside as possible.

Let’s be honest, no one is up early at the lake, but when we do get up we are ready for some Bloody Mary’s and breakfast.  Our favorite is Tito’s Vodka with equal parts Tomato Juice and Clamato plus all the fixings!  We used Ellsworth, WI Cheese Curds, pickles, and summer sausage for our skewers.  Refreshing and a great way to start the day! 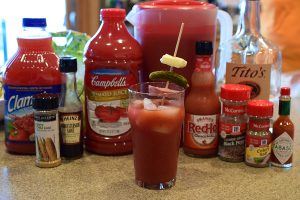 While enjoying our Bloody’s we whipped up a delicious breakfast of Belgian waffles with sausage and homemade Caramel Sauce.  Applegate Naturals Chicken & Apple Breakfast Sausage was our choice for the day.  They are pre-cooked so all you have to do is heat and enjoy!  They are also available in a Chicken & Sage flavor. 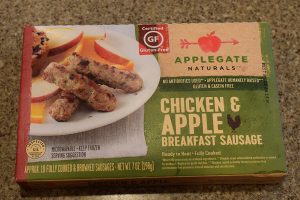 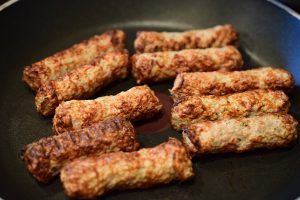 We swear by Krusteaz Belgian Waffle Mix.  The waffles are light and crispy, and can feed a crowd!  We like to be a little adventurous with our toppings and have a variety of options.  It is a holiday after all!  And I don’t think calories count at breakfast 🙂  There is always butter but we also include creamy peanut butter, chocolate chips, Anderson’s Maple Syrup, and homemade Caramel Sauce.  I personally like to put some of each on my waffle and it’s life changing! 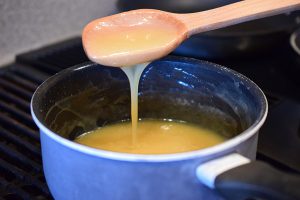 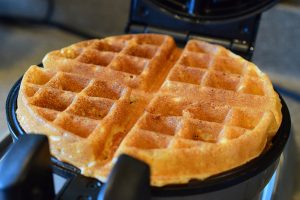 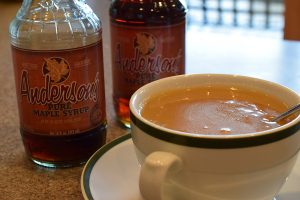 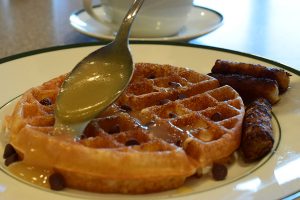 By the time we are done with breakfast the dogs are ready to play.  They’ve waited patiently for us to cook and clean but can’t hold out any longer.  One of their favorite activities at the cabin is to run and chase in the front yard.  So while we digest and think back on the delicious meal we just had, the pups head outside for some exercise. 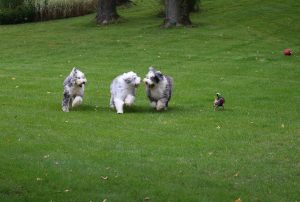 When we eat such a late breakfast we tend to skip lunch and instead have an early afternoon snack so we will still be hungry for dinner.  We made a double batch of Guacamole so we could have some for a snack and save the rest for dinner.  The Guacamole is super easy to make!  Simply chop avocados, green onions, jalapeño, and cilantro, and toss in a bowl with a little lemon juice and salt.  It’s a great afternoon snack because it’s an easy recipe and doesn’t take a lot of time to make, plus it’s light and not too filling. 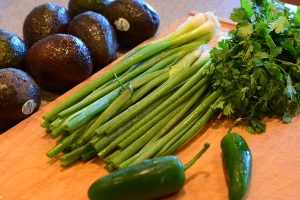 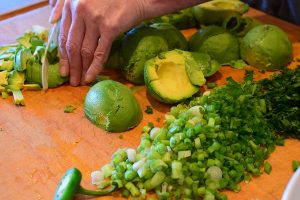 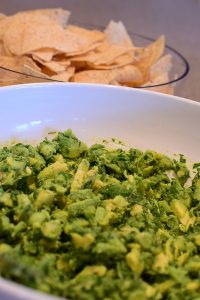 You can’t have an afternoon snack without a beverage….or 8!  One of our favorite activities to do at the cabin on a hot summer day is a beer tasting.   The nice part of a tasting is you get to sample different flavors and varieties of beer.  It’s a great way to try different beers without committing to drinking a whole bottle of something you may or may not like.  In my experience I tend to like maybe 1/2 of the beers we try, but at least I’m trying!  Because fall is near we decided to keep our focus on Oktoberfest beers.  They are a seasonal delight and something we look forward to every year! 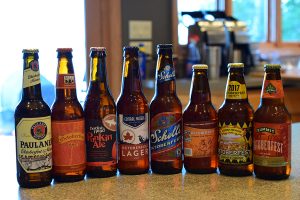 For dinner we made a Chicken Burger with Bacon and Guacamole.  We were able to save time on the Guacamole because we made it earlier in the day.  The burgers are simple to make and have a slight spice to them.  We set the oven to 350 and cooked the bacon for about 40 minutes.  While the bacon was cooking we chopped veggies and prepped the burgers.  Once all the ingredients were combined we rolled the mixture into 8 balls so we knew the burgers would be roughly the same size.  I like to place them on wax paper to flatten because they are easy to remove without a lot of sticking. 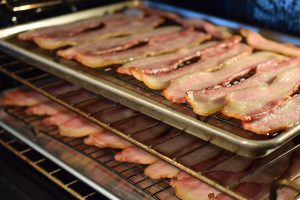 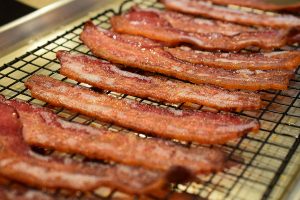 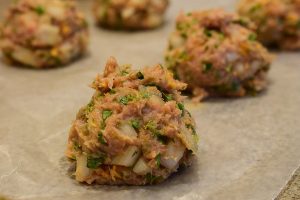 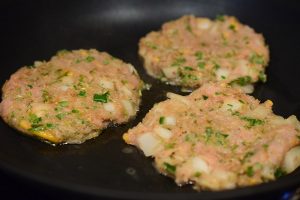 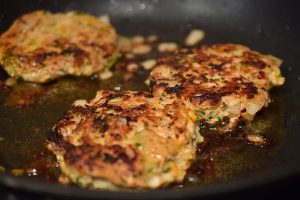 We cooked the burgers over medium heat on the stove versus using the grill.  This helps keep the burgers intact and not fall through the grates because they don’t have the same consistency as ground beef.  Heat the burgers on each side for about 7 minutes.  When the burgers are almost done add sliced cheese to the buns and toast them in the oven for a few minutes.  This makes the bun a little crispy on the outside and melts the cheese.  You are now ready to assemble! 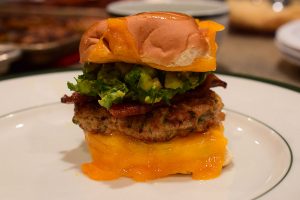 Sunday was a busier day.  We had a housewarming party to attend so we didn’t have much time to cook breakfast.  We had a few slices of leftover bacon from dinner on Saturday and though they would go great on a breakfast sandwich.  We started by frying 2 eggs.  While the eggs were cooking we buttered 2 slices of bread and warmed a pan to medium heat.  One piece of buttered bread went on the bottom, butter facing down.  Then we piled on shredded cheddar cheese, 2 slices of bacon, both of the fried eggs, more shredded cheddar cheese, and topped with the other piece of buttered bread.  Cook on each side for about 3-5 minutes.  It was an amazing breakfast that was also easy to make! 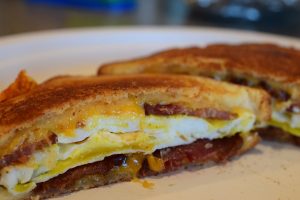 After the housewarming party we had enough time to take the dogs on a pontoon ride.  They deserved a special treat after being home all day while we were out, and we needed to get in at least one ride that day!  The sun was starting to set so it was a but cooler on the lake but the dogs didn’t care.  They loved the breeze in their faces and going on a fun adventure! 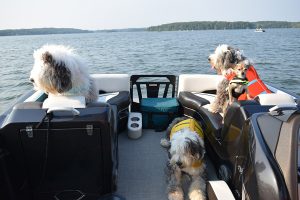 Dinner was, how do I put this?…interesting to assemble but ended up tasting great!  Our planned meal was Pistachio Fettuccine Alfredo but we forgot one main ingredient while grocery shopping, the Parmesan, so we had to improvise with what we could find in the fridge.  We found a package of Gouda and some whipping cream and thought let’s give it a shot.  We grated the Gouda so it would melt easier in the pan.  Once the noodles were done, we added the Gouda and whipping cream, and stirred until creamy.  The end result was divine!  The taste was very similar to Fettuccine Alfredo so we could hardly tell the difference. 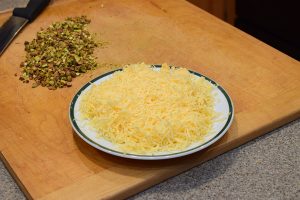 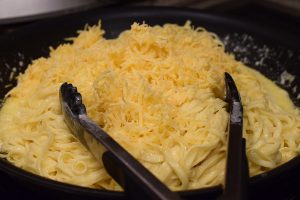 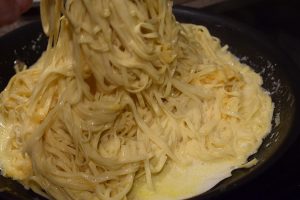 We ended the night sitting around the bonfire enjoying the warmth as the air was a bit chilly! 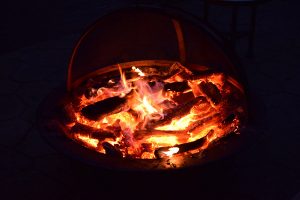 Monday is the last day of our long holiday weekend.  It is a day to celebrate but also means the weekend, and summer, is coming to an end.  We made some great memories this past summer and spent many weekends with family and friends at the cabin so we had to make the most of the day. 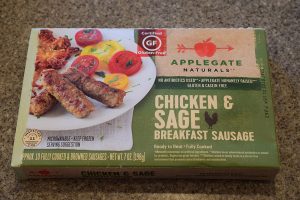 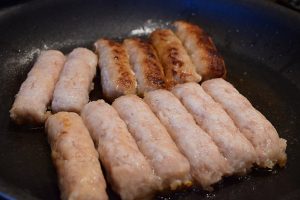 We also made Simply Potatoes Shredded Hash Browns and pancakes.  The hash browns were easy to make as all you have to do is heat a pan with some oil in the bottom, add the hash browns, and flip once a nice crust has formed.  We like to dice a white onion to add to the hash browns along with some paprika before cooking and they are yummy!  We always use Aunt Jemima Original Pancake Mix when making pancakes.  They turn out super light and fluffy!  We had some leftover Caramel Sauce from breakfast on Saturday so we used that as a topping in addition to Anderson’s Maple Syrup, Peanut Butter, butter, and chocolate chips.  It was another delicious meal and a great way to end the weekend! 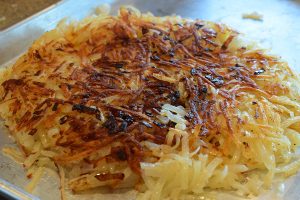 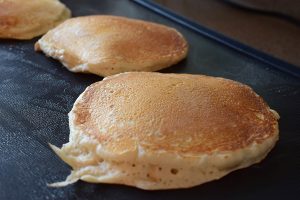 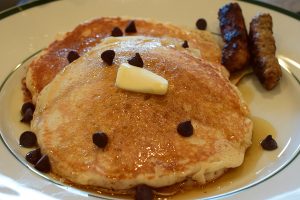 I hope everyone had a safe and fun Labor Day Weekend, Laura