Today is National Waffle Day and what better way to celebrate than with some yummy waffles!  Traditional waffles are best when smothered in syrup or topped with fried chicken or fruit.  I bet really anything would be delicious when paired with a waffle 🙂 but I thought it would be fun to try something different.  I’m making Cinnamon Roll Waffles and Hash Brown Waffles to enjoy while observing this fine holiday! 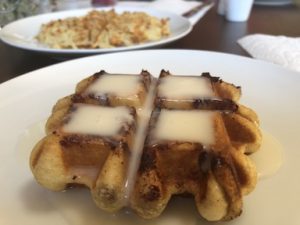 Cinnamon Roll Waffles are exactly what you think – waffles made from cinnamon rolls.  These are SUPER easy to make and take about the same amount of time as a traditional waffle when using a waffle iron.  Still undecided?  You don’t need to make any batter because you are using refrigerated, store-bought cinnamon rolls. 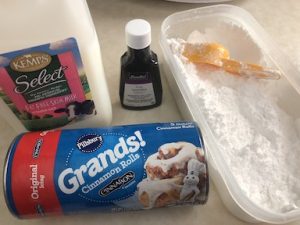 Open a can of Pillsbury Grand! Cinnamon Rolls and pull each roll apart.  I like to set them on wax paper, so they don’t stick to the counter. 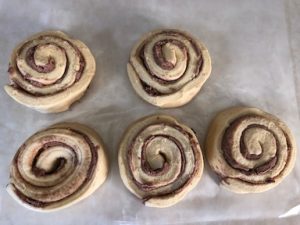 Preheat your waffle iron to medium-high heat.  I used a Belgian Waffle Iron with 8 heat settings, and I kept my heat at 6.  Once the waffle iron is heated, spray the top and bottom with cooking spray.  Then place one cinnamon roll in the center and close the lid.  You may need to push down a bit to allow the lid to close and flip (if using a Belgian Waffle Iron).  Set a timer for 3 minutes and wait! 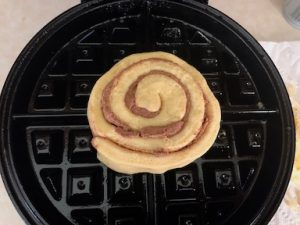 I like to check the “waffle” at 3 minutes, which ended up being the perfect time for my waffle iron, but if you don’t think the dough is quite cooked you should add another minute onto the time.

Once done, carefully remove with a fork or spatula.  I like to preheat my oven to 200 degrees and keep the waffles warm on a baking sheet while the other waffles are cooking but you can go right from waffle iron to plate if you can’t help yourself 🙂  Repeat the cooking process until all cinnamon rolls are cooked, making sure to spray the waffle iron with cooking spray between each cinnamon roll. 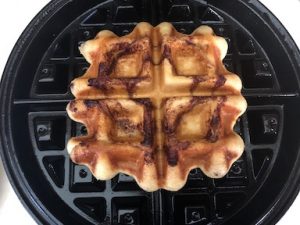 While the cinnamon rolls are cooking, make additional icing.  It’s shocking the amount of icing that comes in the package.  I could put the entire amount on one roll!  So, I like to combine the container of icing with powdered sugar, milk, and vanilla extract.  This provides more than enough icing to go around. 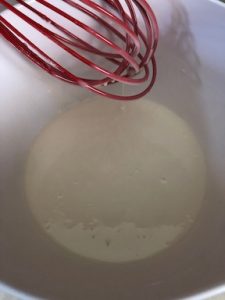 Once all “waffles” are made, drizzle the icing over the top, and enjoy!  These Cinnamon Roll Waffles are perfectly crisp on the outside and fluffy on the inside.  Mmm Mmm Mmm! 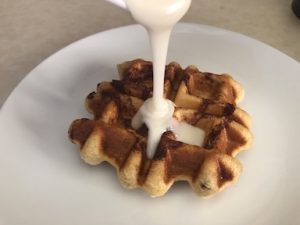 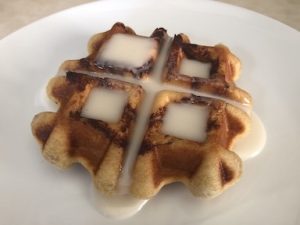 You can also use maple syrup to top the waffles in place of icing.  This tastes more like French Toast. 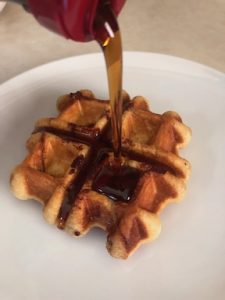 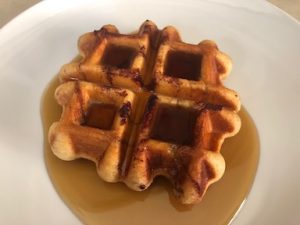 Hash Brown Waffles are crispy on the outside and tender on the inside.  I mean both sides get crispy.  Both. Sides.  Does that ever happen when using a skillet?  Not in my kitchen.  The waffle iron does all the work for you – no flipping or fussing over a pan.  The result is crispy, crunchy, deliciousness. 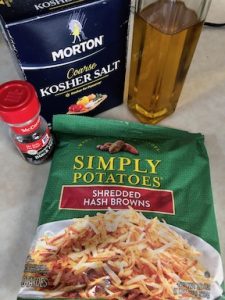 I like to use Simply Potato brand hash browns because they are fresh and thawed.  You can use frozen hash browns but make sure to thaw them first. 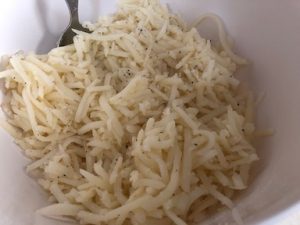 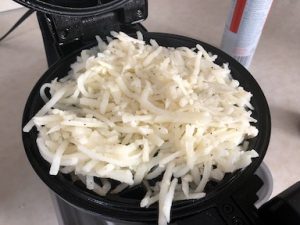 I think the best hash browns take between 10-12 minutes but check them at 10 to make sure they aren’t burning.

Be careful to remove the hash browns once done because you don’t want them to fall apart.  I like to lift one edge with a fork and slide a spatula underneath, then transfer to a baking sheet.  I place the hash browns in a 200-degree oven while the second batch of hash browns cooks.  You can skip this step if you want to dive in right away.  Make sure to spray the waffle iron before the second round.

Serve with additional salt and pepper and enjoy! 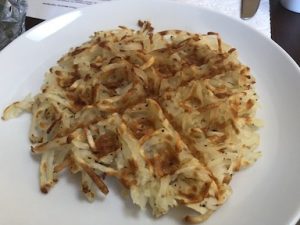