Salmon is slowly becoming one of my favorite seafood dishes to make for a weeknight meal.  It’s healthy, fills you up without leaving you feeling “stuffed”, and can be prepared a variety of ways.  I most commonly bake salmon but have also tried my hand at grilling salmon.  The recipe I want to share with you today calls for baked salmon, but only after it’s been marinated and absorbs some lovely flavors.

The recipe is for Bourbon Brown Sugar Glazed Salmon.  I’m not a big fan on bourbon in general, and if you aren’t either, don’t let that deter you from trying this dish.  Bourbon is in the marinade, but you can’t taste the alcohol because it’s complemented with other seasonings and spices.

The marinade creates this lovely crust while baking that is both sweet and savory, and the salmon is cooked to perfection making it super flakey and moist. 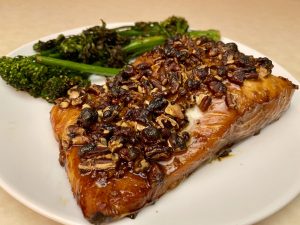 Start by marinating the salmon.  You will want to do this ahead of time (at least one hour, if not more).  In a large mixing bowl, combine the brown sugar, soy sauce, Worcestershire sauce, garlic, black pepper, and bourbon. 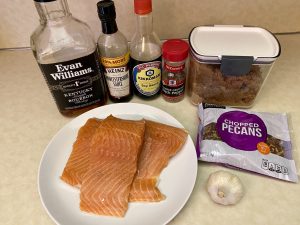 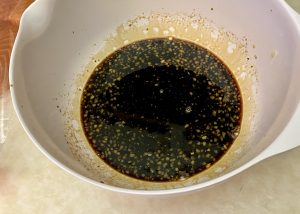 Place the salmon in a large Ziplock bag.  It’s OK if you don’t remove the skin beforehand as the salmon will flake away once baked.  Pour in ½ of the marinade.  Seal the bag, move it around to fully coat the salmon, and place in the fridge.  Let the salmon marinate for at least one hour, but up to 3 hours, before cooking.  Set the other ½ of the marinade aside until ready to use.  I like to keep it in the fridge, so it stays fresh. 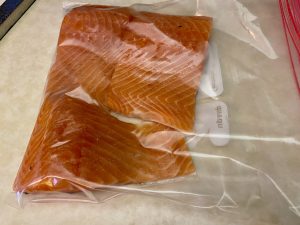 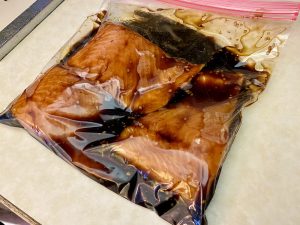 Once the salmon is done marinating, make the glaze.  Add the remaining marinade to a small saucepan and bring to a boil.  Reduce the heat to simmer for about 10 minutes to allow the sauce to thicken.  If the sauce does not thicken, add 1 Tbsp cornstarch to the pan.  Whisk to combine and continue to simmer until the sauce thickens. 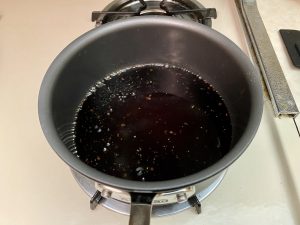 Preheat the oven to 400 degrees F.  Line a baking sheet with parchment paper.

Pour the pecan on the baking sheet in an even layer and bake for about 5 minutes, until lightly toasted.  Remove the pecans to a bowl and set aside. 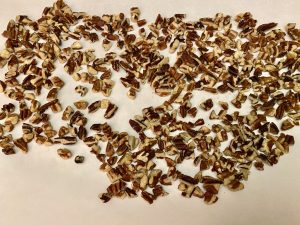 Using the same baking sheet, arrange the salmon filet(s), keeping the skin side down if the skin is still attached.  Discard the marinade left in the Ziplock bag. 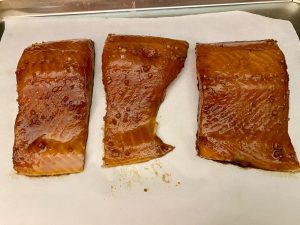 Sprinkle the toasted pecans on top of the salmon filets and press down slightly so they stick to the salmon. 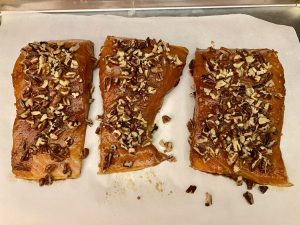 I have to share a slight disclaimer….my picture below looks a little burnt.  The salmon is perfectly cooked!  The burnt part of the image is the marinade.  The more marinade you put on the more likely it is to drip down the side and burn around the salmon like mine did.  This is OK!  It’s not affecting the salmon 🙂 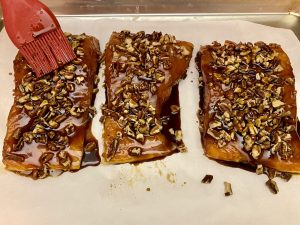 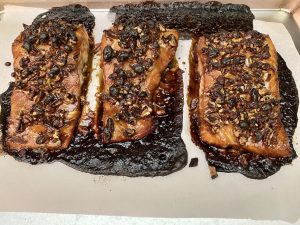 Serve immediately, hot from the oven.  It pairs well with rice, asparagus, broccoli, or potatoes on the side.  Yum! 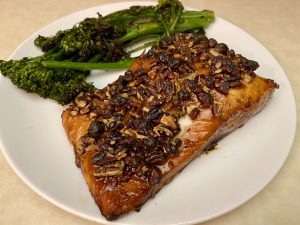 The flavors can’t be beat!  A very tasty dinner that doesn’t take much effort to prepare and will impress your family or guests!