I’ve been on a chicken wing kick lately.  There’s just something about them that I can’t get enough of.  Sure, they are messy to eat, but picking every juicy morsel off the bone is pretty satisfying 🙂

There are a lot of words I would use to describe chicken wings…oven baked, grilled, crispy, sticky, sweet, spicy, saucy, tender, juicy, etc.…but it all depends on the recipe.  There is also the debate of boneless vs. bone-in chicken.  Is it really a chicken wing if it’s boneless?  I used to only eat boneless wings because I didn’t want to do the work but now, I usually prefer bone-in wings because they a bit more succulent.  I think a lot of people would agree.

I started experimenting with different sauce flavors and came up with some fun Asian inspired recipes that I want to share with you today:

The base of each recipe is oven baked chicken wings.  Super simple!  All you have to do is bake the wings (and maybe season them a little) and make the sauce while the chicken bakes.  Then, toss the wings in the sauce, and dinner is ready!

First up is General Tso’s Chicken Wings.  These wings are sweet when you first bite into them, then the heat takes over and you get a deliciously spicy flavor.  The wings are also pretty sticky so make sure you have plenty of napkins nearby! 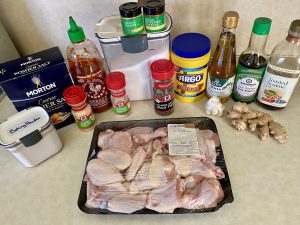 Start by preheating the oven to 350 degrees.  Line 2 baking sheets with parchment paper. 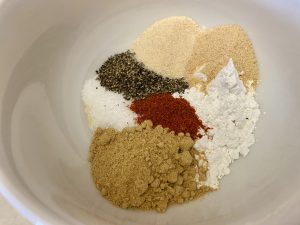 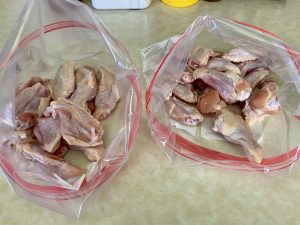 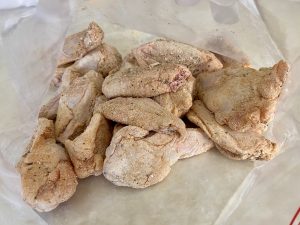 Line the chicken wings in a single layer on the baking sheets. 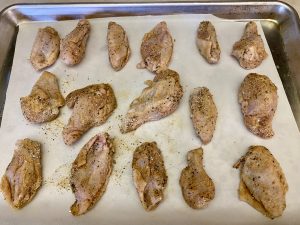 Bake the wings for 40-50 minutes or until golden brown and cooked through.  I like to flip halfway through cooking, but you don’t need to flip the wings.  Remove the wings from the oven and set aside.

While the wings are baking, make the sauce (do this is the last 10 minutes of baking – it doesn’t take long).  In a medium sized bowl, whisk together the soy sauce, mirin, 1/3 cup of water, sesame oil, sriracha, ginger, garlic, and cornstarch.  Season the mixture with salt and pepper (just a pinch) and set aside. 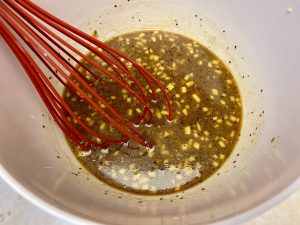 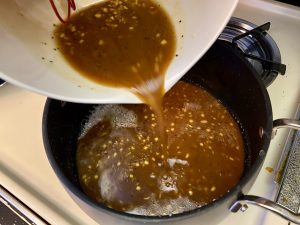 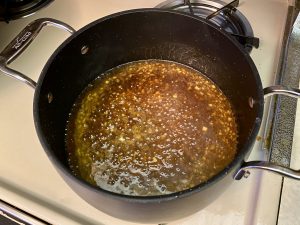 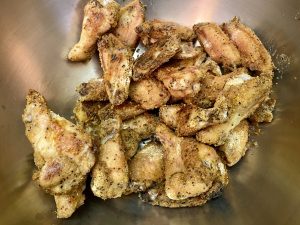 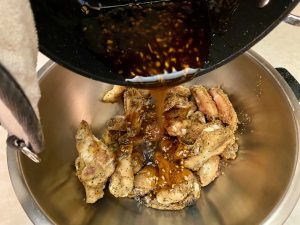 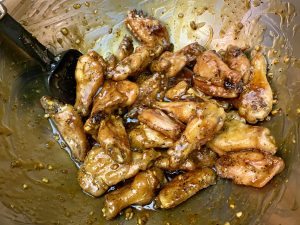 Next up is Kung Pao Chicken Wings.  These wings are very similar to General Tso’s Chicken Wings in that they are sweet and spicy with a sticky texture, but the flavor is more sweet than spicy, and has a slightly salty hint to it.  The sauce is divine so make sure you use every drop!

Place the chicken wings in an even layer on the baking sheet.  You don’t have to season or rub oil on them.  Just bake them plain!  Bake for 40 minutes, flipping halfway through.  Remove the wings from the oven and set aside. 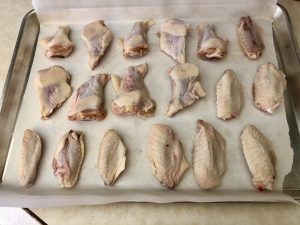 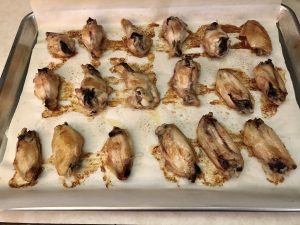 While the chicken bakes, make the sauce.  Add the black bean sauce, sriracha, hoisin sauce, rice wine vinegar, light soy sauce, and sugar to a bowl.  Whisk to combine and set aside. 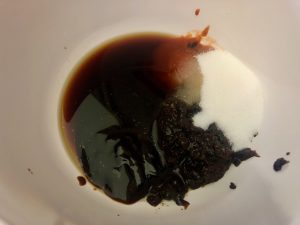 Add the peanut oil to a large skillet and heat over medium heat.  Once hot, add the dried chilies and cook until they begin to blacken.  Add the scallions and garlic and stir to coat with the oil. 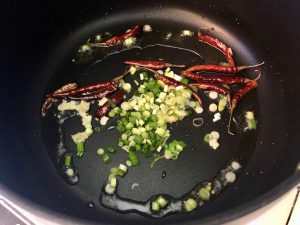 Add the sauce mixture to the skillet and heat until it reaches a low simmer.  I like to remove the dried chilis from the sauce at this point.  You can absolutely leave them in, but I don’t like the surprise of an extra spicy bite when I wasn’t expecting it!  I use tongs to remove them and then throw them away. 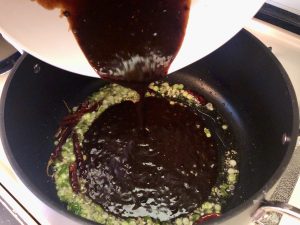 Add the wings to the skillet and toss to coat.  You can also add the wings to a large mixing bowl and pour the sauce over the top, if your skillet isn’t large enough.

Serve warm with a side of rice.  Rice also pairs really well with these wings.  Think of it as eating a slightly modified Asian meal.  You could even add some chopped peanuts on top.  Enjoy!

Next is Pad Thai Chicken Wings.  Think of authentic Thai flavors being infused into a sticky sauce.  Very sweet and savory. 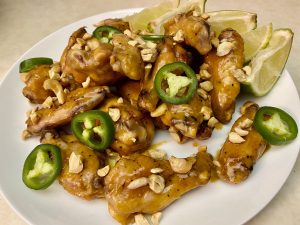 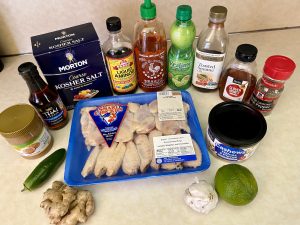 Place the chicken wings in an even layer on the baking sheet.  Lightly season with salt and pepper, and bake for 40 minutes, flipping halfway through.  Remove the wings from the oven and set aside. 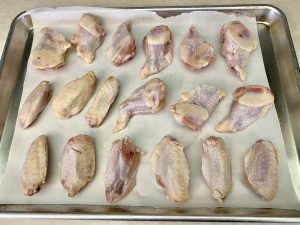 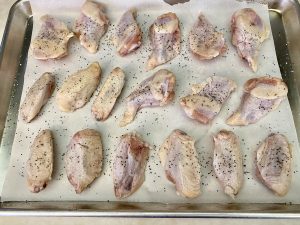 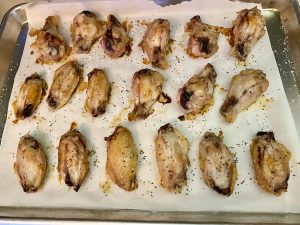 While the chicken makes, make the sauce.  Add the nut butter, water, honey, liquid aminos, lime juice, sriracha, sesame oil, fish sauce, ginger, and garlic to a blender or food processor.  Blend until smooth and set aside.  I like to use a blender because I think it creates a more liquid sauce but use whatever appliance you prefer and have on hand.  You should also be able to use any nut butter.  I use almond butter, but sunflower butter, walnut butter, or even peanut butter should work just fine. 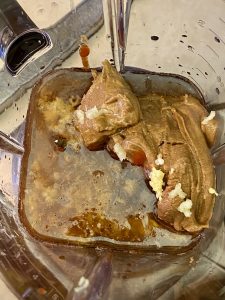 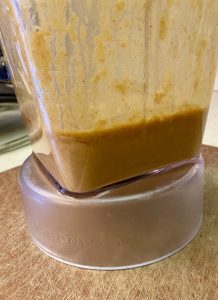 Place the chicken wings in a large bowl.  Pour the sauce mixture over the top and toss to coat.  The heat from the baked wings is plenty to heat the sauce.  If you are worried about the sauce not heating through, add the sauce to a saucepan and warm over medium-low heat for a few minutes before tossing it with the wings. 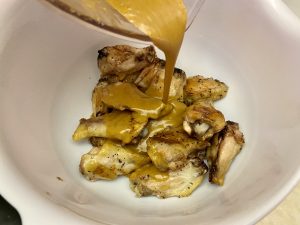 Place the wings on a plate and top with sliced jalapenos, chopped cashews, and a drizzle of sriracha.  Or you can skip the sriracha and have everyone add their own…too spicy for me 🙂  Place lime wedges on the side of the plate to squeeze over the top, as desired.  It add a great tangy flavor and also cuts some of the heat (although I don’t think these wings are terribly spicy).

Serve with a side of rice or vegetables.  Any leftover sauce will pair really nicely with the rice or can be used as a dipping sauce.  So good!

Last up is Thai Sweet Chili Chicken Wings.  Thai Sweet Chili Sauce is a popular dipping sauce for chicken so why not cover chicken wings in its deliciousness?  It’s a sweeter sauce with a garlicky aftertaste and just a hint of spice. 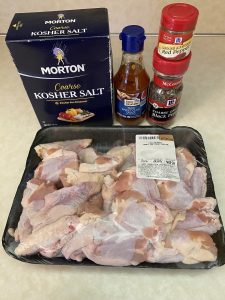 Place the chicken wings in an even layer on the baking sheet.  Drizzle (lightly) with olive oil or spritz with cooking spray.  Then season with salt, pepper, and cayenne pepper.  Bake for 40 minutes, flipping halfway through.  Remove the wings from the oven and set aside. 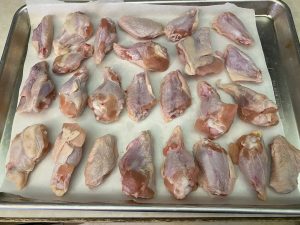 Place the wings in a large bowl.  Then pour the *store-bought* sauce over the top and toss to coat.  Yes, this is a super simple recipe because you only have to bake the chicken.  The sauce is already done for you!  You also don’t have to use the whole bottle.  Start with half and see how far it goes.  Add more if needed.  The heat from the baked wings should be enough to heat the sauce. 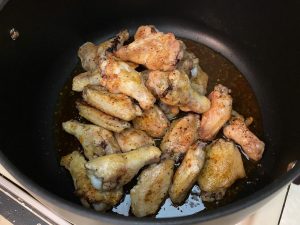 Place the wings on a plate and either drizzle with additional sauce or serve as is.  This recipe also goes well with vegetables or rice on the side.  I think I’ve said it before but I’m partial to rice…. I like the taste and it really helps cut the heat when my lips and mouth are on fire 🙂 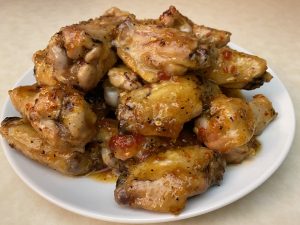 I hope you enjoy these recipes.  They are a great weeknight meal, would easily serve a crowd on game-day, or can be used as appetizers.  Try them all to find your favorite flavor!